The Microsoft Windows Print Spooler service fails to restrict access to functionality that allows users to add printers and related drivers, which can allow a remote authenticated attacker to execute arbitrary code with SYSTEM privileges on a vulnerable system.

The RpcAddPrinterDriverEx() function is used to install a printer driver on a system. One of the parameters to this function is the DRIVER_CONTAINER object, which contains information about which driver is to be used by the added printer. The other argument, dwFileCopyFlags, specifies how replacement printer driver files are to be copied. An attacker can take advantage of the fact that any authenticated user can call RpcAddPrinterDriverEx() and specify a driver file that lives on a remote server. This results in the Print Spooler service spoolsv.exe executing code in an arbitrary DLL file with SYSTEM privileges.

While Microsoft has released an update for CVE-2021-1675, it is important to realize that this update does NOT protect against public exploits that may refer to PrintNightmare or CVE-2021-1675. 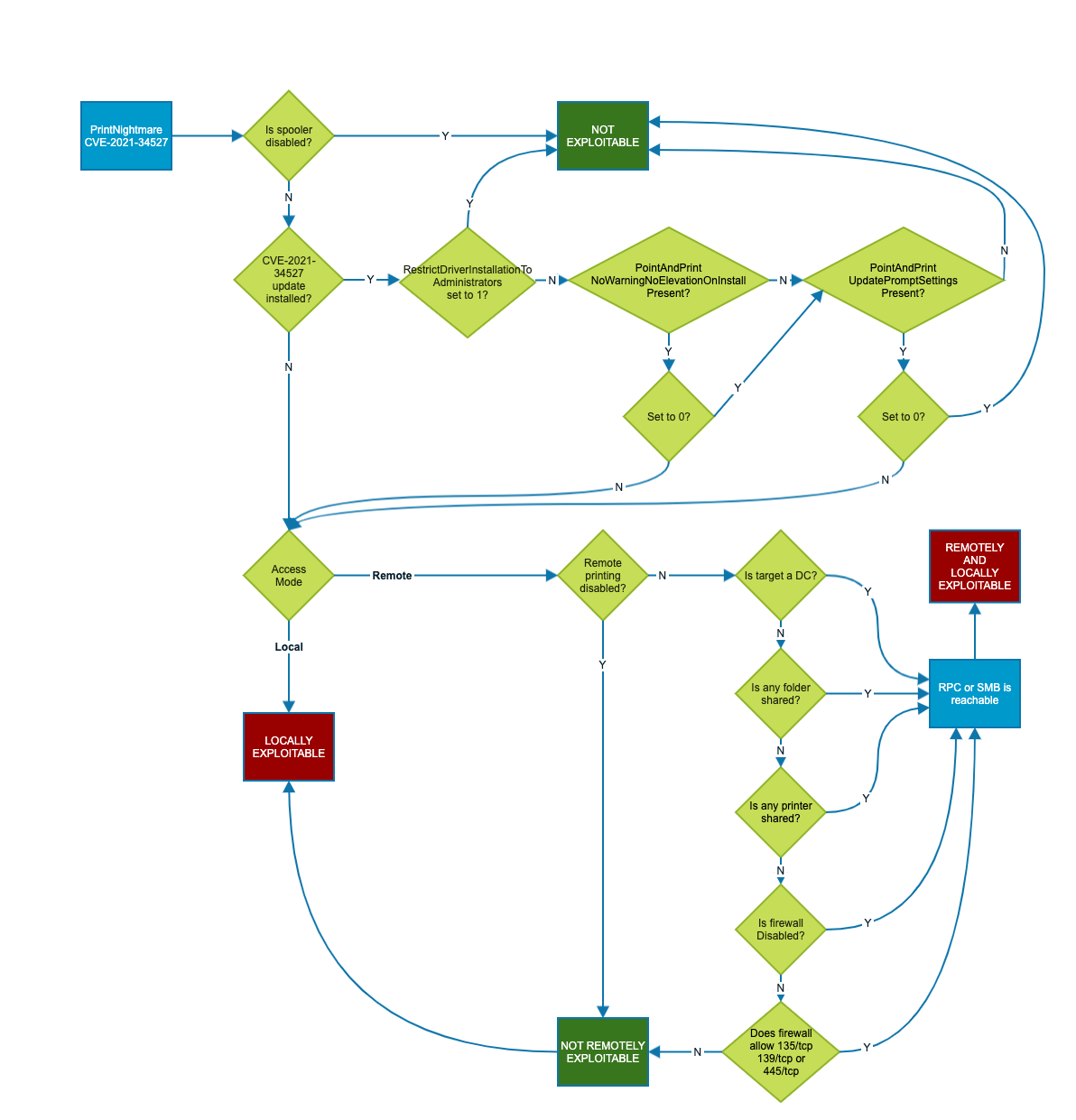 Microsoft has addressed this issue in the updates for CVE-2021-34527. Note that the Microsoft update for CVE-2021-34527 does not effectively prevent exploitation of systems where the Point and Print NoWarningNoElevationOnInstall is set to a non-0 value. Microsoft indicates that systems that have NoWarningNoElevationOnInstall is set to a non-0 value are vulnerable by design. For systems that do not have the CVE-2021-34527 installed, or have Point and Print configured insecurely, please consider the following workarounds:

Microsoft has listed several workarounds in their advisory for CVE-2021-34527. Specifically:

This vulnerability can be mitigated by stopping and disabling the Print Spooler service in Windows.

If disabling the Print Spooler service is appropriate for your enterprise, use the following PowerShell commands:

Impact of workaround Disabling the Print Spooler service disables the ability to print both locally and remotely.

Impact of workaround This policy will block the remote attack vector by preventing inbound remote printing operations. The system will no longer function as a print server, but local printing to a directly attached device will still be possible.

Note: The Print Spooler service must be restarted for this workaround to be activated.

Block RPC and SMB ports at the firewall

Limited testing has shown that blocking both the RPC Endpoint Mapper (135/tcp) and SMB (139/tcp and 445/tcp) incoming traffic at a host-based firewall level can prevent remote exploitation of this vulnerability. Note that blocking these ports on a Windows system may prevent expected capabilities from functioning properly, especially on a system that functions as a server.

Ensure that the Windows Point and Print Restrictions are set to Show warning and elevation prompt for both installing and updating drivers in the Windows Group Policy. Specifically the HKLM\SOFTWARE\Policies\Microsoft\Windows NT\Printers\PointAndPrint\ key should have NoWarningNoElevationOnInstall and UpdatePromptSettings entries that are both set to 0.

After the Microsoft update for CVE-2021-34527 is installed, a registry value called RestrictDriverInstallationToAdministrators in the HKLM\SOFTWARE\Policies\Microsoft\Windows NT\Printers\PointAndPrint\ key is checked, which is intended to restrict printer driver installation to only administrator users. Please see KB5005010 for more details.

This issue was publicly disclosed by Zhiniang Peng and Xuefeng Li.

This document was written by Will Dormann.

We have not received a statement from the vendor.